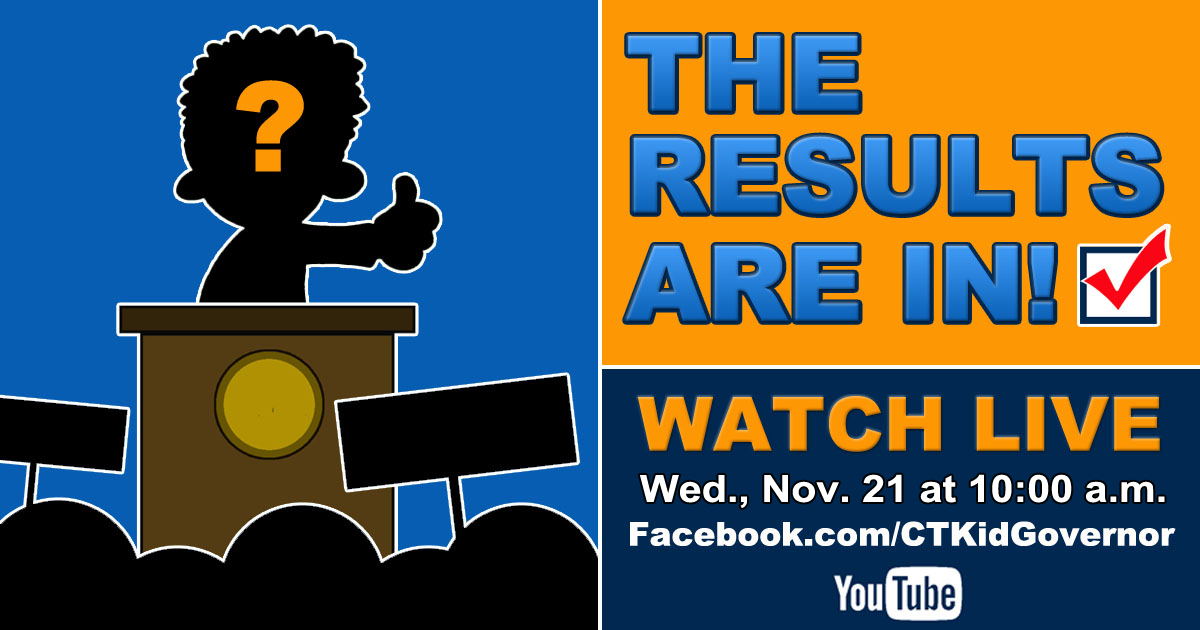 Over 6,400 Connecticut Fifth Graders Registered for this Year’s Statewide Election

AVON, CT – On Wednesday morning, the Connecticut Democracy Center (CTDC) announced that fifth graders across the state had elected Ella Briggs as the 2019 Connecticut’s Kid Governor® (CTKG). The announcement came during a school-wide assembly at Ana Grace Academy of the Arts Elementary Magnet School in Avon where Ella is a fifth-grade student in Mrs. Davis’s class. A breaking news segment featuring reporter Kent Pierce and Secretary of the State Denise Merrill shared the election results with Ana Grace students and online viewers from across the state and nation. Classmates cheered and chanted Ella’s name and the Hartford Gay Men’s Chorus performed as Kid Governor-Elect Ella, who ran on a platform of LGTBQ youth safety, thanked voters, classmates, teachers and family (dogs included) for their support and encouragement. You can watch Ella’s campaign video here. You can watch video of Wednesday morning’s announcement here.

“I am so honored and excited to be your Kid Governor!” proclaimed a jubilant Kid Governor-Elect Ella from the podium in her first address to her constituents during Wednesday’s assembly. “Something that really made me want to run is when someone came up to me to tell me they were part of the LGBTQ community but they were too afraid to tell anyone. I felt my heart break for them.  I want to help all the kids who feel like that, to feel free to be who they are.”

“The Kid Governor program teaches students about civics and the power they have to make a difference in their communities,” remarked Brian Cofrancesco, Head of the Connecticut’s Kid Governor program for the CTDC. “Ella’s passion and conviction for her platform are inspiring, and her ideas clearly resonated with the fifth-grade voters who elected her to serve as their governor.  Every year our candidates step up to tackle challenging issues, many with impacts reaching far beyond fifth grade. Ella will certainly carry on that Kid Governor tradition.”

More than 6,400 Connecticut fifth graders registered to vote in this year’s Statewide Election as students across the state were nominated by their classes to run for Connecticut’s Kid Governor. The award-winning statewide civics program, which is in its fourth year, was created by the CTDC (formerly known as the Connecticut Public Affairs Network) in order to teach students about state government, voting and elections, and the importance of civic engagement.. Candidates were required to submit a campaign video about a community issue important to them, as well as a three-point plan designed to help other students take action on the issue. Seven final candidates moved onto the week-long election and their videos were posted to the CTKG webpage, CT.KidGovernor.org, for their peers to watch before casting their ballots.

These students will form the 2019 CTKG Cabinet and will meet regularly to work on issues important to them and to other fifth graders in the state.   The 2018 CTKG final candidates’ videos are still available for public viewing here.

Ella will begin her term as the 2019 Connecticut’s Kid Governor following her inauguration at Connecticut’s Old State House in January 2019. She will take part in CTDC public programs, raise awareness on LGBTQ youth safety, and encourage students across the state to take action on her platform. She will also lead them 2019 CTKG Cabinet.  Ella will succeed the third and current Connecticut’s Kid Governor, Megan Kasperowski of Portland, who won the 2017 CTKG Statewide Election on her platform of “Stronger Than Cancer: Lifting Spirits & Changing Lives.”